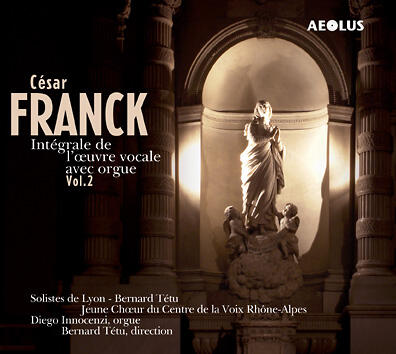 César Franck's sacred vocal music recorded for the first time following the instrumentation and performance practice of the 2nd half of the 19th century!

In 2007 we released a first Super Audio CD dedicated to César Franck's sacred vocal music which was recorded for the first time following the instrumentation and performance practice of the 2nd half of the 19th century (childrens choir, organ, harp and double bass, cello). This recording was highly acclaimed by the leading music magazines (Diapason, Fono Forum, American Record Guide, Prix de l'Académie du Disque Lyrique).
" It's beautiful music, beautifully performed and recorded — and all new to me but dependably Franck. " (Amercian Record Guide)
Today we would like to introduce the second (and last) volume of this edition, based upon the same concept and presenting more world premier recordings: compositions based on plain-song using Franck's original harmonization and alterning with organ versets composed by Franck.
The principal oeuvre on this SACD however is the extensive Mass in A. In addition you will hear the recently published Motet "Justus ut palma" for baritone solo, mixed choir and organ.

As for the first volume we have chosen the extraordinary Aristide Cavaillé-Coll organ of the church of Saint-François-de-Sales in Lyon which is an ideal organ for the accompaniment of choirs thanks to its numerous foundation stops, the two swell boxes and its position in the choir of the church which provides to the organist an ideal proximity to the singers.

These two releases show us a different image of César Franck: the one of the church musician!