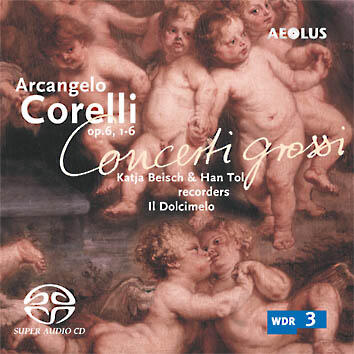 Few composers with such a relatively small oeuvre have had such a great influence to the music-interested contemporaries and later generations like Arcangelo Corelli.

Besides a collection of trio sonatas, solo sonatas, and the concerti grossi (recorded here), published as Op. 1 - 6, there is only a handful of compositions handed down in manuscript.
What is the fascination that Corelli's music held for his contemporaries and the following generations? In fact, his compositions, with their well-balanced form, clear phrasing, intuitive themes, subtle sequences and unobtrusive harmonies, have something timeless about them, comparable to the music of his French antipode Lully or, later, that of Mozart.
In December 1725 the complete arrangement of Corelli's Concerti grossi for two recorders, as heard on this recording with the ensemble Il Dolcimelo, was published in England. It probably goes back to the recorder player and composer Johann Christian Schickardt (ca. 1681 - 1762) from Braunschweig and is characterized by the fact that different types of flutes are used in order to keep the original keys and to be able to use the orchestral parts of the original version. Thus the pieces can be played not only as trio sonatas but also as real concerti grossi.
The ensemble Il Dolcimelo was happy to engage Han Tol, a former prominent member of the Flanders Recorder Quartet, as a guest for this recording.