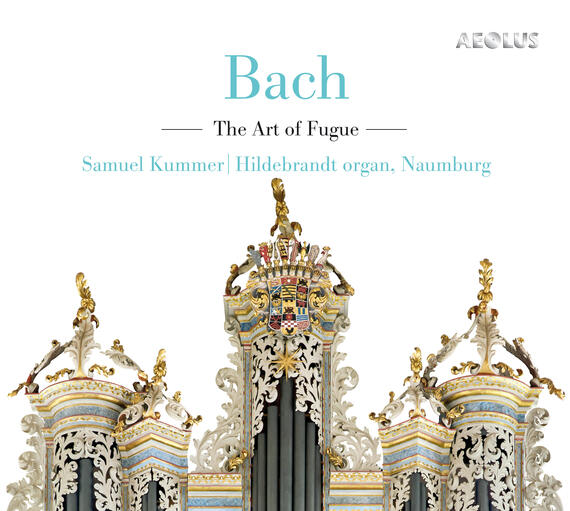 The Art of Fugue

The Art of Fugue is Bach's last great work for a keyboard instrument. There is no other organ that is so closely related to the Art of Fugue as the organ of the Stadtkirche St. Wenzel zu Naumburg by Zacharias Hildebrandt. It embodies Bach's ideal type of organ and it was created almost simultaneously with the Art of Fugue.

“The Art of Fugue” is Bach’s final major work for a keyboard instrument, and more specifically for harpsichord or organ. Bach intends to issue the work in print. He is still able to prepare and supervise the engraving, but dies before it is complete. The final fugue is lacking its crowning conclusion. In this form, the work is published by Bach’s son Carl Philipp Emmanuel in print just one year after his father’s death. The title says it all: In “The Art of Fugue”, Bach delves into every conceivable aspect of contrapuntal artistry and inventiveness and presents the results in a well-planned architectural structure.
The new recording of this cycle was made on the magnificent baroque organ of the Wenzelskirche in Naumburg, built in 1746 by Zacharias Hildebrandt, which J.S. Bach himself was present at the acceptance of the organ.
Never before has this instrument been captured so convincingly in terms of sound, and for the first time the sound of the organ can now be enjoyed in a multi-channel surround recording (SACD-hybrid). The extremely comprehensive textbook contains exciting information on the work, which corresponds to the latest research, as well as a detailed text on the history of the instrument and its exemplary restoration.

To have the opportunity to record the world-famous Zacharias Hildebrandt organ from 1746 in the wonderful acoustics of the Wenzelskirche in Naumburg had been my dream for quite some time. I had already experienced this incredible instrument live in the room on two occasions.
The available CD recordings of this organ did not convince me because of the sound. Often the sound seemed too diffuse to me, sometimes there was no real stereo image and the finely nuanced timbres typical of this organ, especially in the foundation stops, did not reveal their true colors on many recordings as I had hoped.
Therefore I considered it a great challenge to remedy this situation! For this recording, a total of nine Brüel & Kjær DPA 4006 microphones were used. In addition, in the sake of a balance of voices in Samuel Kummer's challenging arrangement of the Art of the Fugue, it was necessary to use spot microphones very gently here and there.
Incidentally, our new double SACD of the Naumburg Hildebrandt organ may be the first multi-channel surround recording of this instrument available on the recording market.
Thanks to the equally detailed and spatially realistic sound of my recording, the most intense emotions can be experienced while listening to it. Who could resist the delicate fragility of a baroque viola di gamba, the full, caressing tone of a principal, the vehemence of the pedal's 32' reed, the thrilling density of the mixture plenum, or the charm of a singing flute? Here, all these incomparable qualities of this instrument, embedded in the excellent acoustics of the church hall, finally emerge to their full potential.

Reviews on “Bach: The Art of Fugue”

“One has rarely heard a version so clearly structured, colourfully registered and intelligently performed to perfection.”
More details...

In the last years of his life, Johann Sebastian Bach was intensively engaged in a refined contrapuntal work, the "Art of the Fugue", though he refrained from specifying which instruments he wanted it played on.
The organist Samuel Kummer has now recorded his personal version of the monumental composition on the magnificent Hildebrandt organ in Naumburg.
Seldom has such a clearly structured, colourfully registered and intelligently concluded version been heard.

One has rarely heard a version so clearly structured, colourfully registered and intelligently performed to perfection.
info2