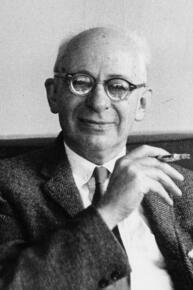 Mario Castelnuovo-Tedesco (born on April 3, 1895 in Florenz and died on March 16, 1968 in Beverly Hills) was an extraordinary an italian composer and pianist.

He was first introduced to the piano by his mother, and composed his first pieces when he was just nine years old. After completing a degree in piano in 1914, he began studying composition under renowned Italian composer Ildebrando Pizzetti, and receiving a diploma in composition in 1918. He soon came to the attention of composer and pianist Alfredo Casella, who included the young Castelnuovo-Tedesco's work in his repertoire. Casella also ensured that Castelnuovo's works would be included in the repertoires of the Societa Nazionale di Musica (later the Corporazione delle Nuove Musiche), granting him exposure throughout Europe as one of Italy's up-and-coming young composers.
A major source of inspiration for him was his Jewish heritage, most notably the Bible and Jewish liturgy.

At the 1932 festival of the International Society of Contemporary Music, held in Venice, Castelnuovo-Tedesco first met the Spanish guitarist Andrés Segovia. The meeting inspired Castelnuovo-Tedesco to write his Guitar Concerto no. 1, one of the first of almost one hundred compositions for that instrument, which earned him the reputation as one of the foremost composers for the guitar in the twentieth century.

The following year the Italian fascist government developed a program toward the arts, which were viewed as a tool for propaganda and promotion of racial ideas. Even before Mussolini officially adopted the Manifesto of Race in 1938, Castelnuovo-Tedesco was banned from the radio and performances of his work were cancelled. The new racial laws, however, convinced him that he should leave Italy. So he left Italy in 1939, shortly before the outbreak of World War II.

Like many artists who fled fascism, Castelnuovo-Tedesco ended up in Hollywood, where, with the help of Jascha Heifetz, he landed a contract with Metro-Goldwyn-Mayer as a film composer. Over the next fifteen years, he worked on scores for some 200 films there and at the other major film studios. Rita Hayworth hired him to write the music for The Loves of Carmen (1948), produced by Hayworth for her Beckworth Productions and released by Columbia Pictures.
He was a significant influence on other major film composers, including Henry Mancini, Nelson Riddle, Herman Stein and André Previn. Jerry Goldsmith and John Williams are both his pupils. His relationship to Hollywood was ambiguous: later in life he attempted to deny the influence that it had on his own work, but he also believed that it was an essentially American artform, much as opera was European.
In the United States, Castelnuovo-Tedesco also composed new operas and works based on American poetry, Jewish liturgy, and the Bible. His notable students include Louis W. Ballard and Ron Purcell. He died in Beverly Hills, California at the age of 72.