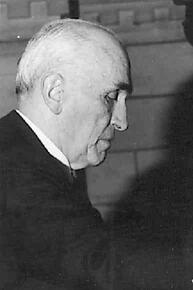 Coming at a watershed moment in French organistic life, André Fleury today occupies a unique position therein. Scion of a family of musicians (his father was a choirmaster), related to the Grosjeans as he was to Elisabeth Brasseur, Fleury successively and at times concurrently benefited from the teaching of Eugène Gigout (for whom he substituted at St. Augustin when he was only 17), Marcel Dupré (in whose National Conservatory class he received his Premier Prix diploma in organ and improvisation) and Louis Vierne. How many could make a comparable claim? Who else managed so felicitously to assimilate such varied artistic languages, antithetical techniques and esthetic stances in the space of barely a dozen years? Hence the versatility of this artist who, at a mature age, was able to incorporate often opposing organistic methods and conceptions, using them to contribute to his own message. If I add that fate moreover led him to cross paths with Charles Tournemire and that, like many of his colleagues, he made forays into gregorian paraphrase, inspired by the master’s great rhapsodies that the churchgoers at Sainte Clotilde were privy to, this should suffice to capture the thinking of a warm-hearted man whose life-work was dedicated to extending the oblique links leading from St. Augustin to St. Sulpice, from Notre-Dame to Ste.Clotilde. Just think of the era this encompasses, in the context of so many young artists eager to embrace the cause of the Amis de l’Orgue and become the first winners of the Performance and Improvisation prizes organised by that society.
Assistant to Charles Tournemire at Ste.Clotilde, André Fleury after the death of Jean Huré was appointed titular organist at St.Augustin and professor at the Ecole Normale de Musique.

Events subsequently led him to Dijon where he succeeded Emile Poillot at the main organ of the Cathedral of St.Bénigne, being called as well to teach organ and piano at the conservatory of the Burgundian capital (1949 through 1971). Back in Paris, his activity bourgeoned as he became co-titulaire of the organ at St.Eustache and of the Cathedral of Versailles; meanwhile the Schola Cantorum entrusted him with the advanced class in organ.

André Fleury realized early on that at the moment he was launching his career a two-pronged movement had become the life-force behind organistic activity in Paris: a symphonic movement whose traditions, after being epitomized by Franck, Widor and Guilmant, were upheld by the names of Vierne, Dupré, Barié, Bourdon; and a liturgical movement based on the illustration of plain chant, on which Charles Tournemire made a decisive impact, followed by numerous disciples: Nibelle, Duruflé, Bonnal, Langlais, Boulnois, Daniel-Lesure. A third conception came to light, which I would term paraliturgical and which several figures embraced at one point or another: Dupré, Alain, Grunenwald, Messiaen. The Romantic organ with its orchestral conception enjoyed the favor of those whose aspirations were limited to aggrandizing the symphony; to the classical organ (or the neoclassical organ) were devoted those who aimed at enriching their musical language through contact with the mutation and mixture stops that the builder had made available to them anew. In this instrumental/organistic/esthetic complex André Fleury holds a central place, a key position.
Norbert Dufourcq