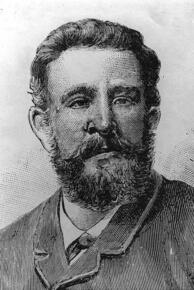 Felipe Gorriti y Osambela was born in Huarte-Araquil (Navarra) on 23rd August 1839 and died in Tolosa (Guipúzcoa) on 12th March 1896.
He studied first of all with his father León Gorriti who was composer and organist in his hometown Huarte-Araquil, also gave organ and violin lessons there and directed the local orchestra. Felipe Gorriti broadened his knowledges later in piano and harmony with Mariano García, conductor of the cathedral of Pamplona, continued with Cándido Aguayo, organist in Santa María de Tolosa, and finally finished his studies in Madrid at the Conservatorio real through composition and organ studies with Hilarión Eslava and Román Jimeno. He got his diploma and medal.

When he was twenty years old he was appointed, in 1859, after a competition, as organist of the united parishes of Santa María and San Pedro de Tafalla (Navarra), where he stayed until 1867. During these eight years he wrote numerous works for the baroque organ with two manuals, which had been ordered by the parish in 1858 from Hermenegildo Gómez.

On the 25th October 1867, when he was 28 years old, Felipe Gorriti conquers the organist and conductor position of the church of Santa María de Tolosa (Guipúzcoa, Basque country), after winning out in the end in a competition with numerous, exceptional competitors. Here he remains up to his death which overtook him, as already mentioned above, in 1896 at the age of 57. Before, in 1878, he had been also appointed the conductor of the orchestra and the music academy of this place.

The extraordinary process of a development from one era to another, combined with the adaptation of two completely different instruments as are the Spanish baroque and the French romantic organ, as well as the international esteem mentioned before, shows clearly that Gorriti is an outstanding figure among the other Spanish organ composers of his time. He is the key figure of the crossing from the baroque era to the romanticism in the Spanish organ music.