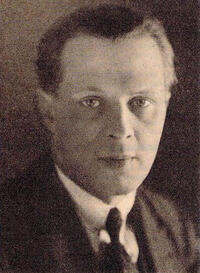 Léon Jongen was a Belgian composer, pianist, conductor and teacher. He was the brother of the composer Joseph Jongen.

After studying at the Liège Conservatory, he won the First Grand Prix de Rome of Belgium with his cantata Les fiancés de Noël (1913), and then held the positions of director and conductor of the French Opera in Hanoi and director of the Royal Conservatory in Brussels. He succeeded his brother Joseph Jongen at the organ of the Saint-Jacques church in Liège.
He made numerous trips to Asia (China, Indochina, Japan) and Morocco. After settling in Tonkin, he was appointed director of music and first conductor of the French Opera in Hanoi. Appointed professor of fugue at the Brussels Conservatory on his return to Belgium in 1934, he succeeded his brother as director of this establishment from 1939 to 1949. He was also rector of the Queen Elisabeth Chapel (1956).