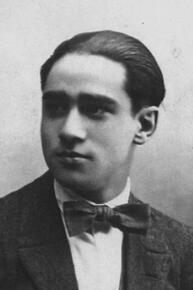 Antonio José Martinez Palacios was born on December 12, 1903, in Burgos. At the age of ten he began to study piano, organ, harmony, and composition with José María Beobide, then organist at the Jesuit church of La Merced in Burgos. In 1927, Antonio José wrote about the man whom he considered as his sole master, “I say this as a man and as a musician! Don José María Beobide is one of the great and good masters, as remarkable as he is modest, as wise as he is overlooked”. For his part, Beobide always considered Antonio José to have been one of his most outstanding students, putting him forward for the post of Director of the Burgos Music Society in 1929.

After his studies with Beobide in Burgos, Antonio José spent four years in Madrid, from 1920 to 1924. There, he composed a number of works, including his Sinfonía castellana. From 1925 to 1929, he taught music at a Jesuit college in Malaga, composing works including the Sonata gallega for piano, Suite ingenua and Evocaciones for orchestra, and the opera El mozo de mulas (The Muleteer).

Antonio José devoted the last seven years of his life to the directorship of the Burgos Music Society and to composing choral works and a sonata for guitar. On October 9, 1936, at the outbreak of the Spanish Civil War, he was shot and killed in Estépar, a village near Burgos. He was just 34 years old.