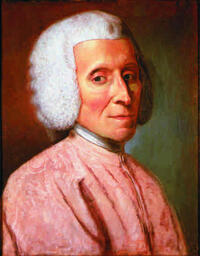 Vincent Lübeck was born in 1654 in Padingbüttel.

He grew up in Flensburg with his stepfather Caspar Förckelrath (? – 1683), from whom he probably also received organ instruction. His father had died in 1654 or late 1653. It is possible that he then continued his education in Hamburg with Reincken or Matthias Weckmann, but there are no historical proofs of this so far. Nor is there any evidence of a connection with Buxtehude who was active in the city of Lübeck.
At the age of twenty, in 1674, Vincent Lübeck was appointed organist of the Hauptkirche St. Cosmae et Damiani in Stade, which was the capital of Bremen and Verden, Swedish dukedoms since 1645; thus Vincent Lübeck occupied one of the most important posts in the western part of North Germany.
In 1690, Vincent Lübeck was appointed Titular Organist of the Etatskirche in Stade by the Swedish government. This promotion did not, however, absolve him from his service obligations at St. Cosmae.
In June 1702, the consistory of the Hamburg Hauptkirche “St. Nicholae” anonymously chose Vincent Lübeck to be their new organist and church treasurer. In 1687, Arp Schnitger had built the largest instrument of his time here, with 4 manuals and 66 (or 67) stops. Vincent Lübeck was succeeded in Stade by his eldest son, Peter Paul.
As he had been in Stade, Vincent Lübeck remained an important advisor for organ-building and repair in Hamburg. A close and trustful relationship had developed during the cooperation between Lübeck and Schnitger in Stade. Lübeck examined about twenty Schnitger organs, as we can read in a letter to the City Council of Zwolle. In contrast to this, he inspected only three organs by other organ-builders.
The friendship with Schnitger notwithstanding, Lübeck always remained apparently impartial and criticised – regardless of Schnitger’s prestige – whenever it seemed to him necessary. He even intervened in the stoplists and in the musical conception itself! Sometimes, however, Schnitger made his plans together with Vincent Lübeck. Thus Lübeck was one of the few organists of his time whose life’s work was fundamentally interlocked with that of an organ-builder.
In 1734, Vincent Lübeck asked the churchwarden to appoint his son Vincent the Younger as his assistant because he was “getting old.”
After his death on 9 February 1740, the son inherited his father’s position of organist of the Nicolaikirche in Hamburg.