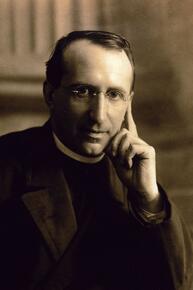 Padre Nemesio Otaño S.J. must be regarded as one of the most important and relevant figures in twentieth-century Spanish music history.

He was born on November 19, 1880, in Azkoitia (Guipúzcoa) and died on April 29, 1956, in San Sebastián. In 1896 he entered the Jesuit monastery of Loyola (near Azpeitia) as a fifteen-year-old novice. For two years he studied humanities, simultaneously gaining musical experience as an organist on the wonderful Cavaillé-Coll organ of the Loyola Basilica. In 1903 he moved to Valladolid where he became acquainted with Vicente Goicoechea, Vicente Arregui, Facundo La Viña and Jacinto R. de Manzanares, who appropriately instructed him in harmony, musical form, composition, orchestration, Gregorian chant and classical polyphony.
He also made the acquaintance of diverse European composers of sacred music, including Angel de Santi, Andrés Mocquereau, Vincent d’Indy, Julio Bas, Rafael Casimiri, Mitterer, Goller and Griesbacher.
Father Nemesio Otaño manifested his interest in the situation of sacred music with the following words: “I saw what an immense work had to be accomplished in Spain for religious art and I understood that this was my path, my calling.” He directed or participated in various congresses for sacred music which followed the guidelines of the Motu Proprio of Pope Pius X. Padre Nemesio Otaño SJ must be regarded as one of the most important and relevant figures in twentieth-century Spanish music history.
Nemesio Otaño composed a total of 19 works for organ. These reveal a musical language which is both elegant and innovative. His sacred organ works show his great veneration for composers such as Wagner, Bruckner, Mahler and Strauss.