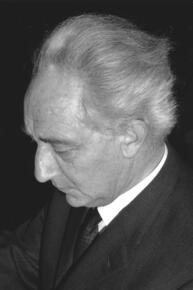 In the course of the 20th century Flor Peeters undoubtedly became the most noted figure in the Belgian world of organ music.

He was born on the 4th of July 1903 in Tielen, east of Antwerp. He passed away in Antwerp, on the very same day 83 years later. Flor Peeters became acquainted with the organ at a very early age, as his father was church organist in Tielen. Flor wasn’t to know his father for very long and when the latter passed away in 1910 Flor’s older brother Emiel took over his father’s post. It is this same brother who enrolled Flor in the school for organ music set up by Lemmens in Mechelen. The training course in the Lemmens institute would have lasted 8 years, but Peeters already managed to win the Lemmens-Tinel prize after only 4 years and he did so with the congratulations of the jury. Peeters attributed his ability to complete his studies in so little time to the fact that in the preceding years he had already been taking organ tuition twice a week from Jef Brandt of Turnhout, who was himself a graduate of the Lemmens institute.
Peeters’ carreer took off quite soon after completing his studies in 1923. He was only 22 when his organ tutor Oscar De Puydt passed away, following which Peeters was nominated principal organist of the Saint Rombouts cathedral in Mechelen as well as professor of organ at the Lemmens institute.
Flor’s son Guido Peeters and Raymond Schroyens wrote an important biography of Guido’s father. His research reveals that Flor Peeters gave a total of 1.143 organ recitals, 253 of which in the USA alone.
Peeters was an influential pedagogue who shaped a new generation of organists. He taught in Mechelen, Gent, Tilburg and Antwerp. As a composer Flor Peeters wrote some 36 hours of organ music, which is equal to all the works of Dupré, Tournemire and Messiaen combined.
Despite being so involved with the french organ music of his time, Peeters did develop a personal style of his own. It reveals a degree of French and/or German influence as is the case with e.g. Joseph Jongen or Paul de Maleingreau, but it does remain inherently Belgian.
According to Raymond Schroyens, Peeters’ style combines Roman spirit with German genius. Flor’s son Guido describes Flor’s style of writing as follows:
“His compositions are characterized by a vivid imagination, a strong tendency towards the Gregorian chant and the modes, a preference for classical forms, the use of polyrhythm and polytonality and from 1966 atonality and serialism as well. Aesthetically his music developed from a late César Franck type of virtuosity via a vigorous neo-classicism towards a thoughtful, introvert and personal tone language.”