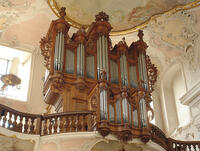 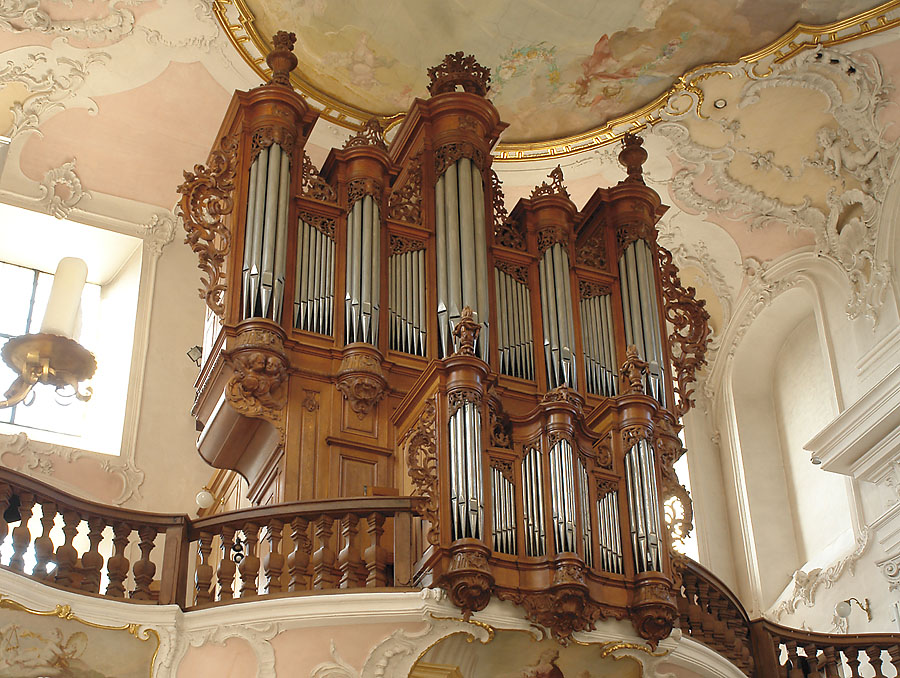 His father Andreas had already completed three organs in Basel (Minster 1711, St. Peter 1712 and St. Leonhard 1718). The contract was agreed in 1759 and the instrument finished in 1761.
The organ was first rebuilt in 1888 by Weigle (Stuttgart and Basel). The Rückpositiv became an Oberwerk, a new console was placed in the Rückpositiv case, and the instrument was tuned to modern pitch. A second rebuild followed in 1913 by Goll (Lucerne), when the original mixtures and reeds were lost.
The instrument was restored in 1959- 1962 by Metzler (Dietikon). The original stoplist was reconstructed, though with the following exceptions: A Trompete 8’ (treble) was added to the Echo (originally there was a Flageolet 1’), and the pedal compass was extended to 27 notes, with five extra stops. The organ was retuned to the original pitch. In 1998, Bernhardt Edskes (Wohlen) installed two diagonal bellows to replace the horizontal bellows by Metzler.
The instrument was renovated by Kern (Strasbourg-Hattmatt) in 2004-2005, including thorough repairs to the windchests, cleaning of the pipework, stabilisation and renovation of the case and repairs to the woodcarving.
The Arlesheim organ is the best-preserved Silbermann organ in the Basel region.
written by Marc Schaefer
© Aeolus