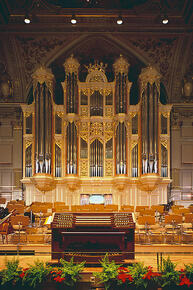 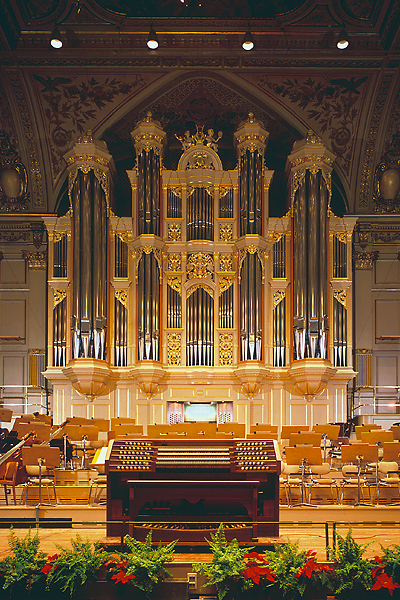 The four-manual instrument at the Tonhall Zurich, built by Messrs. Kleuker and Steinmeyer and inaugurated in 1988, comprises an ensemble of extremely characteristic stops which can jointly constitute a particularly ponderous and dramatic chorus.

This organ suiting for a concert hall fascinates by its richness of colours and by the uniqueness of its specification designed by Jean Guillou.
In order to render a musical dialogue possible, highly differentiated solo stops are located on the various manuals: In the Grand Chceur the cornett e.g., which can be made up of continuously overblowing mutation stops, possesses an extraordinary brilliancy. The same applies to the chamades attached behind the front for reasons of monumental protection. From these, especially the horizontal oboe - presumably a rarity in organ building - is extremely expressive. In the positive, there is the rankett with its sliding tone, the cromorne or the sesquialtera with the typical Dutch sound.
In the pedal the theorbo, a mixture of unusual overtones from the seventh and the ninth (besides the tierce), also represents a stop that is able to paint with a new colour. The Aliquot in the Grand Choeur is a similar mixture. Apart from this, the pedal provides two highly sonorous 32' and soloistically operating stops the way they are applied in transparent trio movements, e.g.
The Recit follows the tradition of Cavaille-Coll. Next to the soft foundation voices and the powerful group of the reed pipes we find the sonorous, yet very clear plein jeu harmonique. The great organ combines the classical organ colours. What deserves mentioning here, however, is particularly the unusually deep Grosse Mixture IV that dramatically fills the sound providing for a marvellously fluent transition from the foundation stops to the mixtures in the crescendo.
The organ possesses two consoles, a mechanical case for the keyboard and a freely movable electrical console that is connected with the organ by way of a co-axial cable. This console provides the most up-to-date electronics produced by Solid State Logic: 360 general combinations as well as 48 divided ones - per manual and pedal, 3 settable crescendi - in addition to an excellently specified standard crescendo - which in principle represent a sequence of 30 combinations that can be recalled by means of the crescendo toe-piston.
Special attention should be paid to the replay system the organ is equipped with: by means of a video tape machine, it is able to record all impulses generated by the organist at the electrical console and to reproduce them afterwards. Thus, the playing of the organ is effected by the control equipment of the video recorder. When sitting in the hall, the organist is in the position to check both the registration and his own interpretation. Altogether, the new organ of the Tonhalle is no doubt an instrument that meets the requirements of all traditions from the organ literature whilst at the same time exceeding them, showing new ways and putting its very personal stamp on any kind of music. 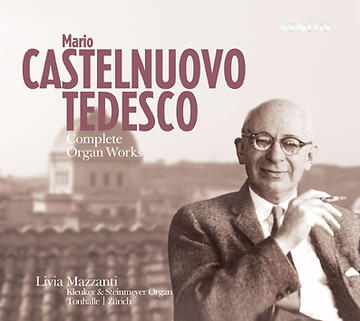