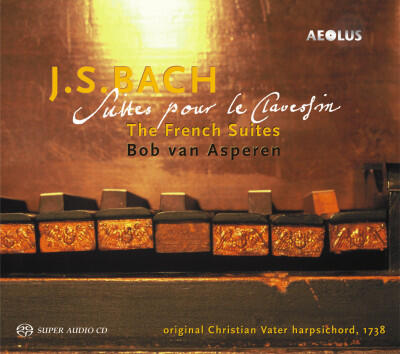 In 2000, Bob van Asperen's recording of Bach’s ”Inventions and Sinfonias” received enthusiastic reviews and awards from throughout the world. This CD has been AEOLUS’ most succesful release so far. Other recordings with Bob van Asperen have also attracted attention, and not just from harpsichord aficionados. Now, Bob van Asperen and AEOLUS again present popular and often-recorded repertoire. We think that these French Suites are something special in every respect.

What’s new here? What can still be offered?

The use of one of the very few original German harpsichords of the Bach era still in playing condition: the wonderful Christian Vater harpsichord in the Germanisches Nationalmuseum, Nuremberg - astonishingly heard here for the first time on a CD/SACD recording!

A warm, natural and vivid recording that is offered in a stereo version as well as in a surround-sound version on this Hybrid-SACD - probably a first for this repertoire.

Included is an extensive booklet containing informative articles about the instrument and the Vater dynasty of instrument makers.

“Asperen’s authoritative accounts of these wonderful pieces and the echoing, brittle clarity of this rather special harpsichord make a highly attractive combination.”
More details...

Bob van Asperen’s J. S. Bach: French Suites (Aeolus AE-10084, rec 2003, 780) is a valuable addition to an already rich catalogue. Here is highly distinguished playing in the Leonhardt mould, with a wonderful sense of controlled freedom. Every individual phrase, figure and ornament is exquisitely shaped but fully integrated into the whole. There is abundant subtlety and nuance, discreet ine´galite´, a touch of whimsy at times, and panache where appropriate (as in the courante and bourre´e of the G major suite). Asperen’s liner notes are full of insights, and the historic instrument on which he plays is of particular interest. This is the Christian Vater single-manual harpsichord of 1738, now in the
Germanisches Nationalmuseum in Nuremberg, and the only extant harpsichord by this important organ builder. Now fully restored, it offers (in Asperen’s words) ‘the opportunity of a rare connection of the specific, Italianate timbre of an original German historic harpsichord, in French chamber pitch [a0 = 392], with the French Suites’. Asperen’s authoritative accounts of these wonderful pieces and the echoing, brittle clarity of this rather special harpsichord make a highly attractive combination.

According to the available evidence, it appears that Johann Sebastian Bach, a 37-year-old widower of less than a year, composed these French Suites for Anna Magdalena Wilcke, a 20-year-old singer, daughter of a trumpeter, and Bach's second wife. If so, he must have really loved her. With their affecting Allemandes, their charming Courantes, and their beguiling Bourrées, the French Suites are among the most immediately appealing of Bach's works for keyboard. And he must have really trusted her, too. With their deeply expressive Sarabandes, the French Suites are also among the most intimately emotional of Bach's works in any genre. Performed here by Bob van Asperen on an exquisitely sensitive Christian Vater harpsichord from 1738, the French Suites are given the deluxe treatment. An intelligent, experienced, and soulful performer, von Asperen is wholly relaxed and comfortable with the music, understanding its ethereal melodies and its lyrical counterpoints, its graceful rhythms and its elegant forms, and articulating them all with effortless naturalness. The Vater harpsichord is a warm-toned and willing instrument, gratefully yielding its subtle overtones and nuanced voicings to von Asperen's adept hands. As reproduced in Aeolus' super audio digital sound, the Vater and von Asperen might as well be just across the room from the listener.

Asperen’s authoritative accounts of these wonderful pieces and the echoing, brittle clarity of this rather special harpsichord make a highly attractive combination.