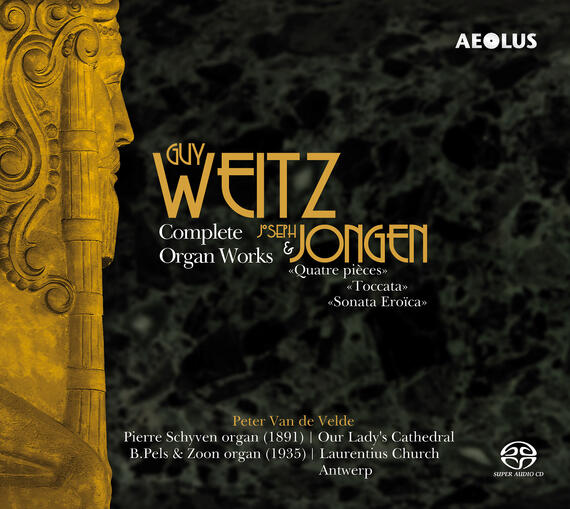 AEOLUS continues it's successful cooperation with the Belgian organist and titular of the Cathedral of Antwerp Peter Van de Velde and presents with this new double-SACD album the complete organ works of the Belgian composer Guy Weitz (1883-1970).

The album is enriched by some major organ works of the well-known Weitz contemporary Joseph Jongen (1873-1953). This double album was recorded on the organs of Antwerp Cathedral (Pierre Schyven, 1891, last recording before its restoration in 2014) and of the Laurentius Church of Antwerp (Pels & Son, 1934), a huge building mounted in the 1932 in art deco style . Aeolus' famous state-of-the-art recording technique (2.0 Steroe and 5.0 Surround Sound) assures a perfect rendition of the generous acoustics of both church buildings and underlines the consistently symphonic character of these post romantic works.
Guy Weitz was born on September 5, 1883 in Verviers (B). His musical talent soon led him to the Conservatory of Liège (Liege). In appreciation of his exceptional talent, he received a scholarship to continue his studies at the Schola Cantorum in Paris. Among his teachers were Alexandre Guilmant and Vincent d'Indy. He also took private lessons with Widor. Upon his return to Belgium in 1909, he became organist in Verviers and Liege. When Germany invaded Belgium in 1914 Weitz fled with his wife and two children to London.
In 1917 he was appointed organist at the Church of the Immaculate Conception - known as Farm Street Church. He held this position almost half a century. His fame grew with his concerts for the International Radio BBC. Moreover he recorded some 78 RPM LPs in 1926 for His Masters Voice, which became a real sales success (these recordings have been partially re-released on CD).
Weitz ' first works for the organ clearly show the influence of the French symphonic style. As a concert organist, he often performs works by Franck, Widor and Vierne, while he does not seem to be interested in new compositions by Dupré, Messiaen or Tournemire. However, the deeply religious Guy Weitz shares Tournemire's passion for Gregorian plain song which is omnipresent in his musical cosmos. Even though Weitz spent the major part of his life in London - his works reveals no English influence.
With this new complete recording of Weitz' organ music the german label Aeolus fills a current gap in the CD repertoire and transfers this task to an expert for Belgian organ music: Peter Van de Velde, who has already recorded several acclaimed recordings for Aeolus (works by Flor Peeters and Paul de Maleingreau). The grandiose Sonata Eroica by Joseph Jongen, his four pieces and his Toccata op.104 are far more than just "fillers" and allow for an interesting comparison of the works of the two Belgians.
This premium-quality album comes with a 6 pages full color PocketPac and 36 pages full color booklet.