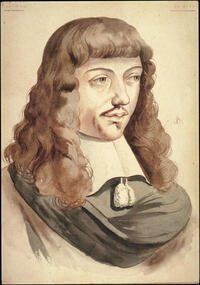 Michel Lambert was born in 1610 in Champigny-sur-Veude, between the provinces of Touraine and Poitou in France. Hismusical education began in the chapel of Gaston d’Orléans, the brother of King Louis XIII.

By the end of the King’s reign, he had become sought after as a singing teacher. In 1661 Lambert was appointedmaître de lamusique de la chambre du roi to Louis XIVand as such he became irreplaceable for devising court festivities, producingmost of the récits for the ballets de cour which were danced by or for Louis XIV. A singer and theorbo player and a regular in the salons of Paris, Lambert was also a friend of the galant poets from the period and set their poems tomusic in his airs sérieux. He was considered a leading
exponent of this refined vocal genre which dominated the secularmusical scene of the time. Following in the footsteps of his teacher Pierre de Nyert, he excelled in the subtle art of embellishing airs with abundant
ornamentation whilst retaining elegance and refinement and always serving the prosody and semantics of the text. This ‘art of cultured singing’ was discussed byMarin Mersenne, Bertrand de Bacilly and Jean Millet in their respective treatises. Its lavish ornamental language was made up of tremblements and cadences (forms of trills), coulements and ports de voix (forms of appoggiatura) passages and other embellishments such as the avant-son.Millet served Besançon Cathedral as canon and sur-chantre and through the examples of airs andmotets in his vocal tutor La belle méthode (published in 1666), he demonstrated that this style was applicable both to secular and religious singing. All of Lambert’s works testify to this art and its pervasive quality. They include not only the numerous airs sérieux but also his religious compositions, which were all intended for the Ténèbres (two complete cycles of lessons and a miserere).