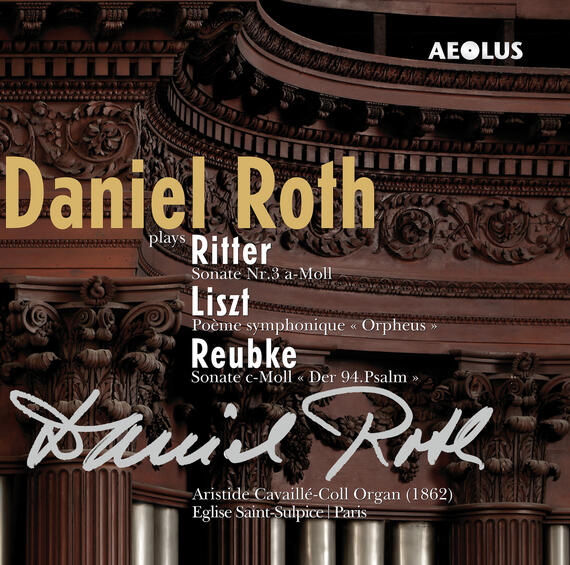 “Based on the evidence of Roth's interpretations and the recording quality, the choice makes musical sense.”
More details...

The impact of Franz Liszt was felt throughout the music world of the 19th century, changing the way many composers approached their craft. This influence extended to organ literature. Graham Barber, in his essay, "German organ music after 1800," in The Cambridge Companion to the Organ, recounts the influence of Liszt's B Minor Piano Sonata on organists. One of those was Julius Reubke. Born in 1834, Reubke lived a tragically short 24 years. This pupil of Liszt employed his teacher's single-movement model for his Sonata on the 94th Psalm. The influence of Liszt is clear, yet Reubke had his own voice.
Others, most notably Thomas Trotter, have given us recordings devoted to Liszt and Reubke. Interestingly, Roth did not elect to record any of Liszt's original music for organ, but rather two transcriptions. Yet Roth's performance makes these sound natural on the organ. In his disc devoted to Liszt-Reubke, Trotter is slightly quicker in the Orpheus transcription. I slightly preferred Roth's choices in tempos. Roth is more than four minutes longer than Trotter in the Reubke Sonata. Both approaches have merit, but, again, I slightly preferred Roth. If Trotter has an advantage, it is that his recording does include more of Liszt, including his Prelude and Fugue on the Name B-A-C-H.
Instead of playing more of Liszt or Reubke, Roth chose the Third Sonata of August Ritter, who lived from 1811 to 1885. His connection with Liszt is not as strong or direct as that of Reubke, but the Liszt influence is clear in the style and form of his work, a sonata like Liszt's B Minor, essentially in one continuous movement. Roth makes a strong case for Ritter as a composer who deserves greater recognition.
There were a few moments of sound congestion but, overall, the recording quality is excellent. The booklet includes informative notes by Martin Weyer and Roth, both of whom comment on the choice of recording this more Germanic music on the organ at Saint-Sulpice in Paris, where Roth has served as organist since 1985. Based on the evidence of Roth's interpretations and the recording quality, the choice makes musical sense. I enjoyed this.

Based on the evidence of Roth's interpretations and the recording quality, the choice makes musical sense.
info2