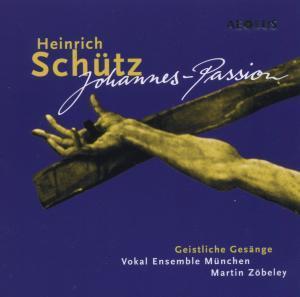 “Listeners who are specifically interested in these works will not go wrong.”
More details...

This recording dates from 1997, but the label was not imported at the time. The program shows Heinrich Schutz at his most understated. The principal work is the St John Passion, one of three Passion settings—the others are St Matthew and St Luke—preserved along with an anonymous St Mark Passion in a 1695
choirbook copied by JZ Grundig some 23 years after the composer's death. There is one other source for the St John Passion: a 1665 manuscript that scholars often call the "early version". There are obvious errors and gaps in the Evangelist's part in this source, but Martin Zobeley believes that the choral movements are more reliable than in the Grundig source, whereas the solo parts show more care and refinement of declamation in Grundig. The present performance is a composite of the two sources.
Lutheran liturgical Passion settings inevitably bring to mind the two surviving works by JS Bach, with their colorful orchestration and devotional embellishment in the form of arias, chorales, and non-biblical accompanied recitatives. The Schutz Passions are much more concise and austere—far more so than Schiitz's Christmas and Easter Oratorios or even his Seven Last Words. The Passions are unaccompanied, and apart from opening and closing choruses, the text comes exclusively from Luther's German translation of the Gospel narrative. They are clearly modeled on the traditional Catholic liturgical Latin Passion sung in plainsong by a solo Evangelist (tenor), a soloist for the words of Jesus (bass), a third soloist for all the other individual characters (tenor), and choir for the crowd. The crowd choruses were sometimes set to polyphony. Among surviving examples are ones by Victoria and Byrd.
Such works bring us to the format of Schütz's Passions. While he did not adhere to the traditional Passion Tone for the solo writing, echoes of it are detectable, and these parts are far more like plainsong than baroque recitative. The traditional tones were obviously his point of departure, while the crowd choruses are freely composed. Zobeley says that "Schutz portrays [the crowds] with poignant insight and considerably more discernment than did Bach 60 years later." The point may be disputed, and in this performance the choruses sound more refined and polite than their dramatic import would dictate.
The rest of this program consists of six of the Twelve Sacred Songs published in 1657. A German Magnificat is followed by three pieces for the German mass: a troped Kyrie based on the Gregorian 'Kyrie Fons Bonitatis', a metrical rhymed paraphrase of the Gloria, and the Nicene Creed in German. The remaining excerpts are a motet setting of the 'Words of Institution of the Last Supper' (compare such pieces as Palestrina's 'Dominus Jesus in Qua Nocte') and a choral grace that begins with Psalm 145:15-16, continues with the Our Father, and concludes with the traditional "Bless us, O Lord, and these thy gifts...". It would be inaccurate to call these pieces inexpressive, but the composer seems more concerned with dignified declamation of the text than with dramatization. Even Zobeley calls them "gebrauchsmusik". Of course, anything by Schutz is worth hearing, but these works may be less interesting to the general listener than many other parts of the composer's output.
The 20-voice Munich Vocal Ensemble was founded in 1992. They are not strictly an early-music ensemble, but their tone is well suited to that repertory. They have a clean and rather light tone with fine blend and excellent choral discipline, helped here by a friendly church acoustic. Listeners who are specifically interested in these works will not go wrong.
GATENS

Listeners who are specifically interested in these works will not go wrong.
info2