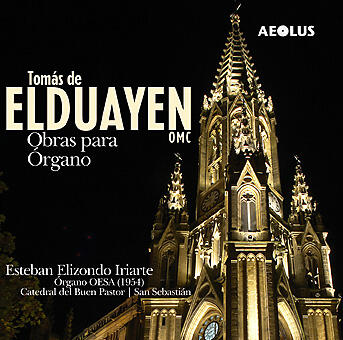 Continuation of our series with Basque organ music and the organist Esteban Elizondo Iriarte: organ works of the Capuchin's monk Tomás de Elduayen, recorded on the organ of the cathedral of San Sebastián, the biggest organ in Spain.

With his new CD Esteban Elizondo Iriarte presents the basque composer Padre Tomás de Elduayen (1882-1953), another representative of the Basque organ romanticism. Tomás de Elduayen, born in the Basque provinces, lived after his studies first in Chile and then in Argentina where he was able to combine his pastoral work with musical practice. In 1920 he came back to Spain. In this time he started publishing his first compositions. Between 1910-20 he published several works for organ in the magazine "Música Sacro-Hispana", mostly preludes on Basque themes as well as his cycle „The Seven last words” for voice and organ. His contemporaries gave favourable descriptions of his music: “…There he developed a chromatic style which, as a result, led to a more direct, more personal musical language based on free, impressionist harmonies with some excursions into polytonality.”
The compositional œuvre of Tomás María de Elduayen is very extensive and numbers almost 200 works, from which many have remained unpublished.
On this CD Esteban Elizondo Iriarte put together a 65-minute programme with a representative cross section by the organ work of Tomás de Elduayen. The pieces are all from short to middle duration and remain absolutely in the tradition of Elduayen's contemporaries José María Beobide, Luís Urteaga or Jesus Guridi. to whose works Elizondo has already dedicated many recordings on our label. Also, there are reminiscences perceptible to the music of the French contemporaries (for example to some of the Pièces en style libre by Louis Vierne). This repertoire is very well suitable above all for the liturgical use, because it's degree of difficulty is rather low, while still the harmony is attractive and imaginative. The works of Tomás de Elduayen have been published partially by Esteban Elizondo and can be found in a big 500 pages book with works of the Basque organ romanticism.
http://www.trito.es/details.php? ref=DL00458
This CD has been recorded on the biggest organ of Spain: the cathedral del Buen Pastor (of the good shepherd) in San Sebastián houses a five-manual neoclassicistic instrument with 125 stops built by the company Organería Española SA from Azpeitia. It was built in 1954 and is considered as the biggest organ of Spain. It combines - as neoclassical instruments mostly do - elements of the baroque with symphonic timbres, contains many mutation stops and two open 32' pedal stops. Elements of the Iberian organ are there too however, also in the form of a big Trompetería. Jesus Guridi composed his famous "Tríptico del Buen Pastor" for the inauguration of the organ. The demolition of the instrument was prevented in the end of the 90s by Esteban Elizondo Iriarte who has fought vehemently for the preservation of this meanwhile historically important instrument. Thus a comprehensive restoration could be carried out three years ago. This new recording is the first of this monumental and for a longer time unplayable instrument, at least the first since the renovation.