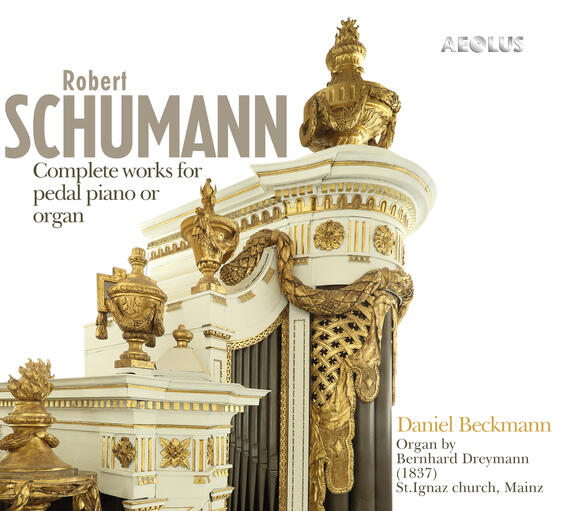 Aeolus' first collaboration with the cathedral organist Daniel Beckmann from Mainz leads us to a Bernhard Dreymann organ, which has just been restored to its former glory, located in the St. Ignazkirche in Mainz. The instrument, built in 1837 at the beginning of the Romantic period, was praised by Christian Heinrich Rinck as exemplary for the then modern organ building and fits exactly into the time when Robert Schumann wrote his works for pedal piano or organ.

At the time when Robert Schumann was composing his studies and fugues for pedal piano, the organbuilding was in shadow in most European countries.
Clara wrote in her diary about the purchase of a pedal board for the Schumanns: "On April 24th [...] we received a pedal board under our piano [...]. Robert found greater interest in the instrument and composed some sketches and studies for the pedal piano, which will certainly be very well received as something new." All of these compositions were written in Dresden in 1845.
In one of the earliest reviews of the B-A-C-H fugues, Magdeburg cathedral organist August Gottfried Ritter wrote: "Those familiar with Robert Schumann will not be surprised by such a change. Such a profound and sensitive composer, so thoroughly hostile to all effects daubed on the outside, must be attracted to the instrument so closely related to his inner being, finding in it the most appropriate expression of his thoughts". As he wrote in a letter, Schumann was convinced that the fugues were "a task of which I believe they will perhaps outlive my other ones the longest".
Due to its abundant foundation stops and the resulting diverse possibilities of dynamic gradations, the Dreymann organ is almost predestined for a recording of these three cycles.