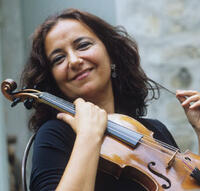 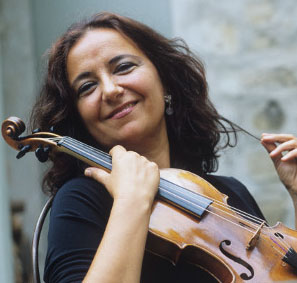 Hélène Schmitt is an award-wining violinist from France. She studied with Chiara Bianchini in Basel and continued to perfect her playing with Reinhard Goebel in Cologne. She was a prizewinner at the international competitions in Bruges, Amsterdam, and Melk, and of the Fondation del Duca (Institut des Beaux Arts Paris).

Her repertoire encompasses the literature of the seventeenth, eighteenth, and nineteenth centuries for solo violin, for violin with basso continuo, harpsichord, or fortepiano, as well as for string quartet and, more and more frequently, contemporary music: composer Florentine Mulsant has dedicated a number of works for solo violin to Hélène Schmitt.
Hélène Schmitt founded the Ensemble Luceram, which is dedicated to the Baroque and Classical repertoire, and that she leads from the first desk. With the Quatuor Baillot, which she initiated, she plays Classical and also Romantic literature as first violinist. She has been invited by numerous ensembles to perform as concertmaster. She cultivates an intensive collaboration with harpsichordist François Guerrier and lutenist Rolf Lislevand. Among her musical partners are Jörg-Andreas Bötticher, Gaetano Nasillo, Christophe Coin, Alexei Lubimov, and Tobias Koch.
Hélène  Schmitt has given concerts in many of Europe’s renowned venues, including at the Cité de la Musique in Paris, the Festival de Montpellier Radio-France, the Innsbrucker  Festwochen, the  festivals in Bruges, Utrecht, and Saintes, the Forum Alte Musik Zürich, the Folle Journée in Nantes, Bozar in Brussels, in Versailles, Ambronay, Cologne, Berlin, at the Handel Festivals in Göttingen and Halle, and at the Schwetzingen Festival, as well as in the USA, South America, and Japan. She has regularly served on the jury of international competitions.
Hélène  Schmitt can be heard on numerous CD recordings, including that of J. S. Bach’s complete Partitas and Sonatas for solo violin. Many of her CDs have won awards and received unanimous acclaim from the press.
Hélène Schmitt plays on a violin by Camillo Camilli from the early eighteenth century and on an instrument by Michele Deconet from 1765, the latter being put at her disposal by the Violin Assets Foundation. 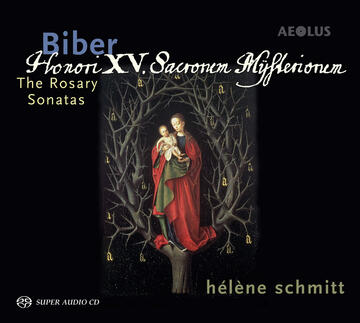