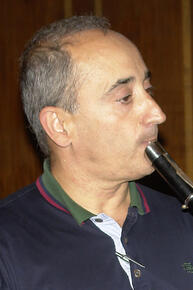 From a family with a traditional dedication to Basque music, José Ignacio Ansorena was born in San Sebastián in 1953, studying there at the Conservatory.

He graduated in Philosophy and Letters at the EUTG of San Sebastián, specialising in Romance Philology. He was appointed professor of the txistu (Basque fipple flute) at the Conservatorio Superior of San Sebastián, with the position of director of the Municipal Txistu Band, with which he has appeared in important contests that have brought triumphs, over the years. His work has been fundamental in refining the art of the txistu and the study of its technique and teaching, contributing notably to the extension of the instrument’s range and repertoire. He has published a four-volume Method for the txistu and the tamboril, Txistu Gozoa. In 1992 he won the Felipe Arresebeitia poetry competition, organized by Euskalzainda, the Academy of the Basque Language, and has published various works on folk-music, with a number of recordings. He is one of the trio of Basque clowns Tzirri, Mirri eta Txiribiton.