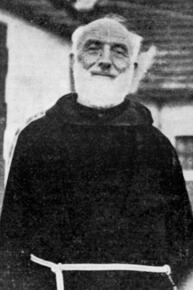 Tomás Echeverria Elosegui was born in the city of Elduayen (Guipúzcoa) on 9 September 1882.

He registered as a student at the Academy of Lecaroz (Navarra), led by Capuchin fathers, where he studied the humanities and theology. His love of music had always been great, ever since childhood. At the same institute he later studied harmony and counterpoint with Ismael Echezarra, together with fellow students José Antonio de Donostia and Nicholas Tolosa. He joined the Capuchin order on 6 January 1901. It was customary to assume the name of one’s city of birth in the course of joining the order. His ordination followed on 21 December 1907.
During the first two subsequent years, Tomás María de Elduayen lived first in Chile (as organist of the monastery of San Antonio de Santiago) and then in Argentina, where he combined pastoral work with music. He was an indefatigable reader of Spanish classics and, thanks to his eagerness to learn, succeeded in acquiring for himself a more profound knowledge of music, literature and art. His cultural background was enormous and included a wide range of subjects.
In 1920 he returned to Lecaroz and later went to Hondarribia. During this period he began publishing his first compositions. Between 1910 and 1920 he published several works for organ in the journal “Música Sacro-Hispana,” especially preludes on Basque themes as well as his cycle “The Seven Words” for voice and organ.
Ondarra Lorenzo gave a favourable description of his music: “…There he developed a chromatic style which, as a result, led to a more direct, more personal musical language based on free, impressionist harmonies with some excursions into polytonality.”
The compositional œuvre of Tomás María de Elduayen is very extensive and numbers almost 200 works. These include compositions such as “Laudes Eucharisticae,” and “Laudes Mariale,” the Mass “O Doctor Optime,” the cycle “The Seven Words,” his triptych “Antonius” and the Magnificat “Libera me Domine” amongst many others, most of which have remained unpublished.