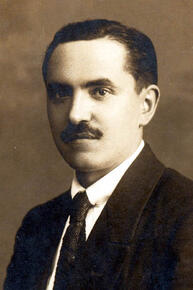 Luís Urteaga Iturrioz was born on December 5, 1882, in Villafranca de Oria (now Ordizia) in the province of Guipuzcoa and died on April 11, 1960, in San Sebastián. He began studying aural training and singing in Ordizia as a child with Francisco Gárate, the organist and conductor of Luís Urteaga’s church choir. At the age of twelve he began studying with Gárate’s successors Lorenzo Martinéz and Cándido Elorza. In 1899, Luís Urteaga’s father encouraged his son, then aged 17, to study harmony and composition in San Sebastián with José Rodareda, conductor of the San Sebastián orchestra and professor at the conservatoire. In 1900, Luís Urteaga contacted Martín Rodríguez, organist in the neighbouring town of Beasain, asking to become his pupil. Rodríguez, who had an outstanding reputation, taught him organ, counterpoint, and fugue. In 1901 Martín Rodríguez was appointed organist in Balmaseda in Vizcaya province, beating 21 candidates from throughout Spain. Luís Urteaga decided to follow his teacher to Balmaseda. To the end of his life, Luís Urteaga always spoke of Rodríguez with the utmost gratitude and respect, while Rodríguez considered Urteaga as one of his most talented pupils.

In 1903, when he was 21, Luís Urteaga was appointed organist in Berastegi (Guipuzcoa province), beating many other candidates. There he earned such an excellent reputation that in 1905, after the death of Bonifacio Calparsoro, organist and conductor of the Zumaia orchestra, he was appointed organist and conductor of the choir and orchestra in his stead. He held these positions for 15 years. One of his most signification works for organ, the Fantasia religiosa, dates from this period.

On January 18, 1908, Luís Urteaga married Baldomera Loidi Puy in the church of San Severino, Balmesada. His bride was the eldest daughter of Ildefonso Loidi; the couple met at the bride’s father’s home in Balmaseda. The couple had five sons, including the well-known composer and organist Juan Urteaga Loidi.

When the organist for the parish of San Vicente in San Sebastián, Ildefonso Lizarriturri Aizpitarte, retired in 1919, Juan Muñoz, a great benefactor of the parish, nominated Luís Urteaga as his successor. Given Urteaga’s remarkable reputation, the suggestion was immediately accepted.

On March 13, 1924, Luís Urteaga was the sole candidate for the post of professor at the San Sebastián conservatoire. Luís Urteaga also in charge of organ and harmony at the conservatoire, where he taught until he was in his seventies. He was also a member of the School of Sacred Music in Madrid.

On December 22, 1953 he was awarded the medal of honour of the city of San Sebastián, followed on January 21, 1954 by the Orden Civil Alfonso X el Sabio. In 1958 the Association of Txistu Musicians made him an honorary member in recognition of his contribution to the instrument.

Luís Urteaga was a man of deeply-held religious beliefs, sensitive, generous with his time, and extremely modest. In fact, so modest was he that he refused many honours. On July 23, 1960, three months after his death, his home town of Ordizia honoured him by placing a plaque on the house of his birth in Calle Marqués de Argüeso 14-16 (now Kale Nagusia).